Two Kayaks to a Roof Rack

Possibly, you have carried a kayak on the top of your vehicle at least once unless you are an utter beginner in kayaking. But what happens if you include a second kayak in the calculation? Most roof racks are designed to hold two kayaks of full size, so this shouldn't present much of a challenge for you. However, it will take some practice to get the hang of it. This is when the following guide comes in handy:

I have provided you with the ground rules and detailed instructions on adequately securing two kayaks to a roof rack step-by-step!

If you follow these steps, you will quickly become the master of transporting kayaks, and everyone will bow down to you as the monarch of kayak hauling. Two Kayaks to a Roof Rack

When it comes to the things you need to carry a kayak, you can't expect to do an excellent job of securing two kayaks to a roof rack if you don't have the appropriate equipment. In light of this, the following is a list of the things you'll need:

Roof Rack You'll need a roof rack, either one that was placed by the manufacturer or one that was added by you later, that has two side rails and a set of railings that are referred to as crossbars running between them. Several specialized twin kayak roof racks are available on the market today, and these roof racks complete everything required to carry kayaks on the top of a vehicle.

Accessories for Roof Racks - Roof Racks The roof rack serves as the basis for the system, but the attachments streamline and simplify the operation. When securing two kayaks to a vehicle roof rack, you may find that having two J-Hooks for kayak racks or, even better, a stacker is of great assistance.

Two separate strap sets consisting of ratchet straps will be used to tie down the kayaks. You want them to have many more feet of length; if at all feasible, purchase several different-sized pairs.

It is also possible to use rope, but in this case, you will need to know how to knot a trucker's hitch. Additionally, it is not required to have someone assist you in putting the kayaks onto the top of your vehicle; however, having someone do so is more than welcome, and this is contingent upon the weight of the kayaks. Don't worry if your vehicle doesn't have enough room for a roof rack or if you need a kayak rack for a car that doesn't have rails; we've still got you covered in either case. 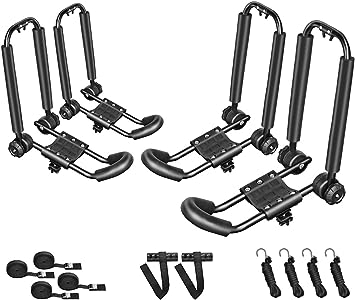 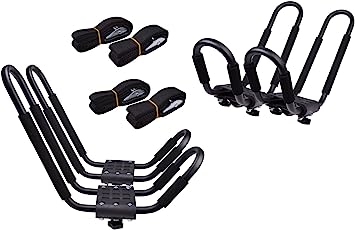 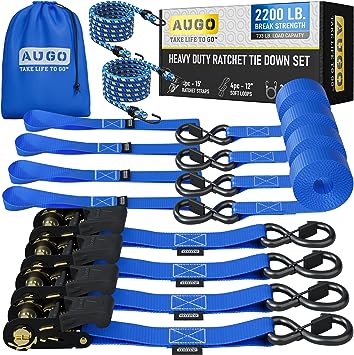 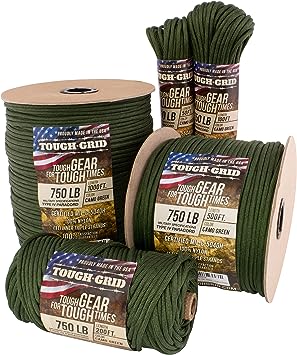 Before Securing Kayaks to a Roof Rack, There Are Some Additional Considerations To Make And Things To Check Strapping Kayaks On A top of the car

Before you get started, you may want to think about the following while you're at it:

The Rules Of The Road As Well As The Law - Always verify what the local regulations have to say about overhanging objects, carrying items that aren't secure, and the safety of transporting kayaks. You know it is against the law to throw things out of a moving car, right?

The capacity of your vehicle – There is a weight restriction for the rooftop of every car, regardless of whether it is an SUV, a sedan, or a coupe, and it is nothing near as much as you would think it would be. When considering the weight of the roof rack itself, most can only support a maximum of around 165 pounds.

Roof Rack Capacity even though roof racks may accommodate enormous and awkward items that there is no way could fit inside your car, there is still a maximum roof load that your vehicle can support. Even if your roof rack system has a 200-pound capacity, you can't carry more than what the roof can hold.

Instructions For Attaching Two Kayaks To A Roof Rack, Presented In A Step-By-Step Format Kayaks On A top of the car

Now, let's get down to the serious work at hand!

You would think that the first thing to do is to put the kayaks on the roof rack, but if you just have two kayaks, it will be much simpler to set up the straps first. Now, get hold of two straps;

First, pass one through the front crossbar and the other through the back crossbar, positioning them, so they are centered between the two, and then proceed from there. The crossbar pair of straps at the front of the vehicle should be positioned so that they rest on the center of the windshield, and the ones at the back should hang down the middle of the rear glass.

It will have to be one kayak at a time for you to get this done, so grab the first one and move it to the side of your roof rack where it belongs.

To make space for the second kayak, put it over as far to one side as you can, whether it's the driver's side or the passenger's side. You'll need to experiment with a few various locations and do some readjusting until you find the one that works best.

Throw the front and rear tie-down straps around the first kayak, fasten them, and ensure they are reasonably loose. Once you have determined the optimum position for the first kayak, go to the next step. You don't want to overtighten the straps just yet since you may have to make additional changes to the first one after loading the second kayak onto the vehicle roof rack.

Put some gear in your second canoe, and then shove it up against the first one:

If there is enough for both kayaks up there, then make sure there is space between them. It is preferable to have them constantly rubbing against one another. If there is not enough space, reposition the first kayak. In any case, they should be positioned such that they are facing each other in the middle of the roof rack.

Once the second kayak is in place, repeat the procedures that were done for the first kayak to attach it:

Place the second front and rear strap over the kayak and fasten the buckles to hold them in place. However, this time around, you may tighten them to their maximum capacity to guarantee that the second kayak will be held on the roof rack appropriately. When you're driving down the highway, the last thing you want is for the kayak to tumble off the top of the car.

Step Number Six: Return To Kayak Number One And Tighten The Straps

You should check that the second kayak is still positioned correctly on the roof rack before returning to where you began. If it does not, you will need to make the appropriate modifications, including releasing the two straps attached to the first kayak and then resetting them both. After ensuring everything is in order, you can next secure the first kayak by pulling the tie-down straps more tightly.

Always take a minute to review everything and check to ensure that both kayaks are properly fastened and tied down. It is important to ensure that both sets of tie-down straps are sufficiently secure and tight so that the kayaks do not move about on the roof rack. Also, make sure you remember to wrap the ends of the straps that are hanging free around the crossbars. You don't want them to be moving about in the breeze.

When Securing Two Kayaks To A Roof Rack, It Is Important To Avoid Making These Two Common Mistakes When you know the two most prevalent errors, it's a lot simpler to prevent them, right?

The first mistake is making things more complex than they need to be by loading both kayaks onto the roof rack and then putting up the tie-down straps, and this should not be necessary. Instead, bring the belts into position and tie the kayaks together one at a time.

Attempting to transfer two kayaks with a single set of straps may lead to the boats altering their position or even completely escaping the straps, which is the second common mistake people make while transporting kayaks. You run the risk of causing damage to the kayaks or, even worse, jeopardizing the safety of people on the road.

When loading two kayaks onto a roof rack, it never ceases to amaze me how many paddlers make the same errors over and over again. Therefore, if nothing else, I hope you can end the pattern.

How To: Tying down two kayaks on your roof

It doesn't seem quite as difficult as you would have anticipated now that we've covered how to Securely fasten two kayaks to a roof rack at the same time, doesn't it? Most of the challenge consists of locating the optimal location for your kayaks and stowing them away safely. However, other than that, you need to adhere to the majority of the same regulations and procedures as when securing a single kayak to the roof of your vehicle, although in a slightly different sequence.

Feel free to go back through the steps whenever you believe it's necessary:

Putting the hang of it may need a few practice runs, but once you do, getting your kayaks into the water will be a piece of cake! How to Securely Fasten Two Kayaks to a Roof Rack

The Best 10 Kayak Rack For SUV Kayak Rack for Truck: Kayak Truck Racks For Any Budget How To Build A Kayak Rack For An RV 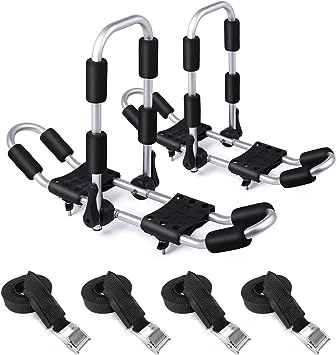 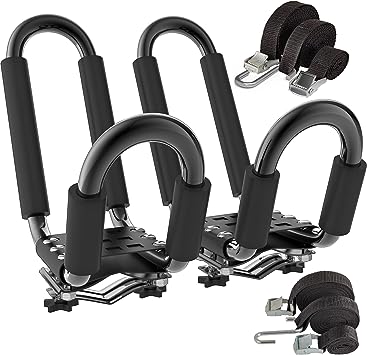 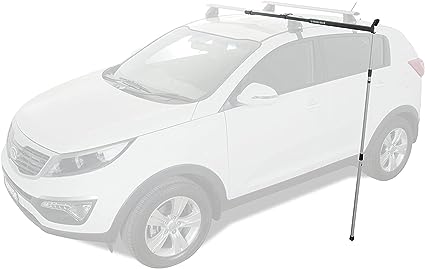 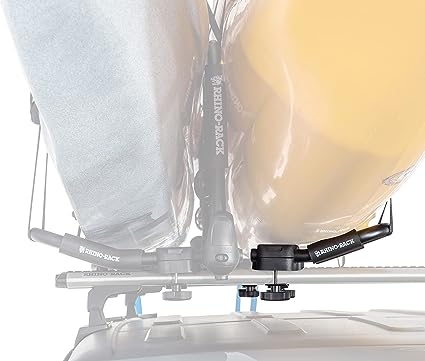 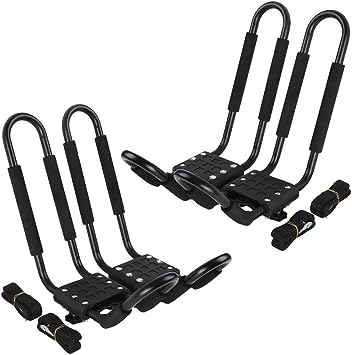 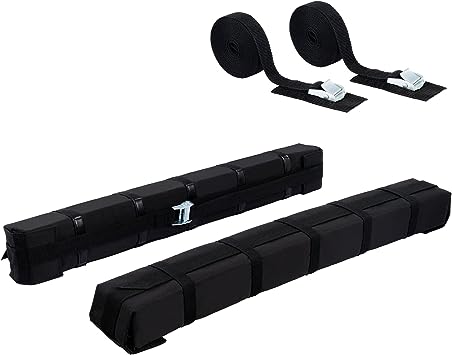